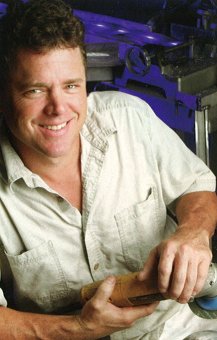 You and I may look at a hunk of hard metal only to whisk it away to the nearest scrap yard without a moments thought. But to artist-inventor Robert Sadlemire, a gleaming piece of metal is a malleable medium full of mystery and possibility, or what he describes as. “dense, handsome and very sexy.”

The son of a machinist, Sadlemire meshes artistic gift and inordinate vision with functional practically. He attended art school in the early 19890s, dabble in metal sculptures and eventually made his artistic mark with positive-negative faces classically recorded in steal

While he kept one eye on the world, sadlemire could never quell his mechanical curiosity.” I always felt a constant pressure to create and explore, and make use of technology,” he says. “My approach shifted to functional. I wanted to make things that were not only beautiful but useful too. That’s when I started making my own machines that would bend the metal for architectural pieces.”

“It’s like solving problems in the real world,” he continues. “I go into homes now to solve design issues and give ideas. I create art that has a use. When I make a stairway that gives metal a life and feeling, it will be functional art that’s there forever. That’s very different from hanging a metaphor on the wall.”

And very savvy. The once starving artist selling metal pieces from the back of his car has found a way to market his trade while staying in the creative arena. The genre he describes as “neo-tech-classic-funk”. Like he says, “You can’t feed two realities. I always stayed with my art, somehow, some way.”

Now Sadlemire spends most of his time fashioning custom railings, beds, gates, stairways, and architectural elements like “motion sculptures;” time that gives him “fulfillment and satisfaction.”

Technological innovation keeps him ever alert to fresh possibilities and gives him an edge when it comes to moving functional art to the next level. When he couldn’t get metal top bend the way he wanted it to, Sadlemire invented his own machine to handle the task. But he does admit that being open to and an advocate of change “can be exhausting.” “Sometimes I surprise myself,” he says. “I think, “How did I figure that out?’ It’s almost precognitive. I have to keep faith that I’ll solve the problem with proportion and line. When you’re making a metal stairway with curved riders, for example, it’s all very subtle. You can’t even be one inch off. I can’t tell you how it happens. It just does. I conceptualize and then come up with an objective solution with metal.”

For now, Robert Sadlemire has created his own artistic utopia, a near-perfect world for creation: “What artist need are space and some money. And then leave them alone.”

Left: Not for the faint of heart, artist Robert Sadlemire employs a fiery plasma arc cutting tool to etch a design unto aluminum.
Right: “the Award” is a hanging metal sculpture that Sadlemire fashioned out of recycled materials. The piece is illuminated from within the face and has a usable shelf. Saddlemire describes “The Award” as one of his “participatory art” collection, explaining that “you’re involved with it.”